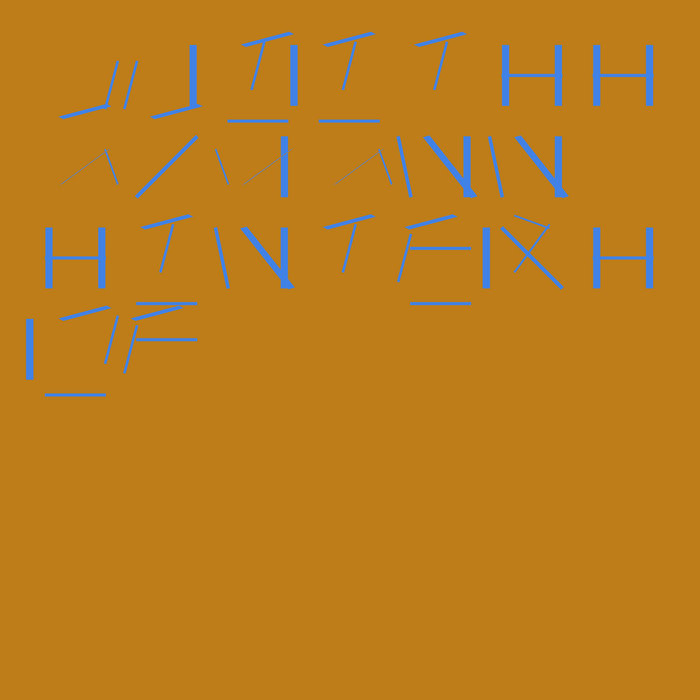 Judith Hamann is a cellist/performer/composer from Narrm (Melbourne), currently based in Berlin. Judith’s recent work has focused on an examination of ‘shaking’ in live solo performance practice and the creation of new works for cello and humming, as well as electro-acoustic fixed media composition articulating collapse as a generative imaginary surface.

Judith’s work has previously been published by labels including Blank Forms, Black Truffle, Another Timbre, Marginal Frequency and caduc.

In July 2020, after several years without a home, I ended up moving into a small, one room apartment in Moabit, Berlin, a pandemic fallout accident/lucky break. The apartment is in the hinterhaus (back house) in the Mietskaserne configuration of Berlin apartments, where the street facing vorhaus (front house) is large and originally housed the bourgeoisie, while the smaller apartments behind it were for the working class. Historically, the further back you went, the darker and smaller the dwellings were, and the poorer the inhabitants. The idea behind this approach to urban design, was that despite the marking of social and class difference, building economic diversity into each overall ‘house’ would in some way insulate neighbourhoods against economic mono-cultures, and that despite not aiming to actually change economic disparity, that shared spaces would create a more integrated, harmonious society.

My apartment is at the very back of the back house, and looks onto a small configuration of (inaccessible) divided gardens shared by three buildings, a secret little hinterhof; a backyard if you will. It is leafy, and in summer oh-so-green in that northern European way, populated with sycamore and firs, slick leaved ivy advancing up the wall, european magpies with their brush of luminous cobalt green tail feathers, rare and magical visits from two shy woodpeckers, a pair of nesting pigeons, a charm of goldfinches, a ubiquity of sparrows, collective nouns for days.

I’ve never lived in Europe and I’ve also never really lived like this, in such dense stacking, with so many lives audible at once. I’ve always lived in sprawling lower density cities, Narrm (Melbourne), San Diego, always within easy reach of eucalyptus and visible horizons.

This hinterhof acts as a reverberant sound space, a constellation of reflective angular surfaces that mean that all sound that finds its way in, from its inhabitants and the surrounding streets, bounces around this shared basin. There are resonant frequencies to the hinterhof, a tiny glow of 100hz, an aura of 350-ish blooming around certain sonic events. Each conversation, bird call, fork against plate, gust of wind or sheet of rain, amateur music practice hour, home renovation activity, traffic snarl, party or quarrel, ends up part of my field of listening. Sometimes I feel a little like an eavesdropping version of Jimmy Stewart in Rear Window, but listening for contour instead of content, a different kind of trace.

In the autumn, these sounds floated in through wide open windows, but as the weather changed, so did the kinds of sounds and the filters and bandwidths for how I heard/could hear this quasi-hive space I now inhabited. In the Berlin low skied winter, the voices of my neighbours seep in through the ceiling, my heating whistles, fridge clicks and hums, water pipes sing, the old bathroom window that doesn’t ever quite close letting in brittle breezes and rattling leaves, discussions between the birds.

I don’t really want to think about this piece as yet-another-lockdown-piece (which of course in many ways, it is), yet the limits of my space and resources, the horizons of my day to day listening have of course shaped it. The hinterhof is in many ways the only collective sounding I can respond to right now. I’ve been recording the porous space that is my apartment for months now, dangling a mic out the window while I’m reading, recording the drones of the heating, the snatches of neighbours practicing, construction workers next door drilling with the radio on, the snow. I had been thinking about the idea of collapse in relation to sound fields a lot in the work I was making last year, and that has also seeped into this project. I don’t mean that in any representational sense, but more that by collapsing temporal layers, days into days, different kind of spaces and weather and time into each other, whether that can create a new imaginary listening space, an impossible surface that still communicates something, generates some kind of new field of hearing, which in turn, for me, folds into other kinds of mingled, imaginary musics.

Sometimes I feel I may have become quite strange.

So, I started humming along with the heating and the contours of voices leaking from upstairs, playing cello along with the low-mid range resonances of the hinterhof, weaving in recordings of people’s voices who are far away and who I miss so much, fabricating a kind of imagined shared space. The pitched material is drawn out from the frequencies I hear in the hof recordings, via the mediation of listening to/with the apartment. From extending them outwards, through that process I uncover harmony, relational connections, gestures, interplay. In a way, I am mapping and then feeding back into the space the same territories, just through different filters: through voice, electronics, through the mediating bodies of the cello and my own body.

My friends and loves are often my dreams these days, and I appear in theirs. A friend’s dream about my death made its way into this piece, he sent me a video message about it, about crying dreams, about how it feels to touch that space in dreamed worlds. Listening with the hinterhof over several months has made me think about communal listening, shared listening, thinking about how we can connect through hearing the same space, how we might touch on a shared feeling through a shared hearing, in some kind of analogue to how we might touch in dreamed spaces.

I know that we don’t/can’t experience or hear the ‘same’ thing and that listening positionality plays a significant role in this, especially my own: that of a white, settler-colonial listener. The thing I’ve been thinking about as I worked on this piece is that while I don’t know my hinterhof neighbours, us back-of-the-back-house people who ended up sharing this yard, in some way we do form a community via this aural space. We hear each other, we somehow navigate by a communal composite sounding, albeit it, perhaps, mostly unconsciously.

What does it enact to share a quotidian sonic space, to hear the same reflections, frequencies, and contours, even if mediated by windows and floors, ceilings and walls? More specifically to this time perhaps, what does it do or comment on in relation to questions of isolation? Can you consider yourself part of a community that is framed only by a shared listening experience? Is it possible to feel a sense of solidarity or belonging despite our atomised apartment living, via what we hear?

I know that this space for listening has affected the shape and the weight of my own loneliness this winter lockdown, in the way one might bounce its heft on your palm like a stone, feeling its material loading, its density, contours, and textures. I also think about the kinds of poverty and density of living which this house would have once held. The listening space of this hinterhof was designed for a particular class and economic strata of people, so in some ways, we are all listening through an old instrument: a sonic space whose resonance is defined via a residual architecture of inequality, intended for a very different audience (although I doubt that ‘audience’ was ever really considered with sonic intentionality in this design at all).

Perhaps this piece is a kind of working through, a process of uncovering and responding to my own listening position in relation to where I am now.

Deep Listening, to me, speaks to a kind of porous listening space, a practice of allowing other beings, phenomena, into an embodied and responsive kind of hearing. There’s a section in Dylan Robinison’s (brilliant) book Hungry Listening, where there is a discussion between two settler listeners about deep listening as a movement towards an “ideal”, and thus a process, a practice, something in motion that troubles the world/self distinction in a specific way. I think perhaps its framing these days, often, is posed as some kind of interface between a nature/culture binary, but I think it’s more about a process/practice of undoing that opposition. I would also suggest that deep listening is not passive, it is a kind of action but it is also not about control or mastery. A lot of my work and research inhabits these process/performance based spaces specifically, living in-between concept and outcome, I’m interested in the navigation of the task of performance and the materiality of that practice, in the idea that the ephemeral is not immaterial (hi Muñoz), in how we might begin to consider ways to un-settle performer positionality. I suspect that folded into this, is a kind of relative, a cousin or thereabouts, to deep listening: that of an active, multi-perspectival listening/performer assemblage.

Deep listening is also, I feel, a way of entering into a queer listening frame or practice, not only because of its origins in queer femme community and of course, Pauline Oliveros’ work, but also through what it shifts, where it places us, its troubling of the listener as either a universal or a singular subject position.

Is there a relationship between deep listening and durational or long-form listening in this piece? In some way, perhaps. I think here about La Monte Young’s “tuning is a function of time” quote, which directs us towards the notion that compositional material asks something of us, that its relational properties enact a claim of desire, in a sense: that of determining the rate and scale of a temporal unfolding. I’m not sure that this piece is necessarily a very good example of deep or durational listening on my part… It’s much more active and episodic, it is blurry, far thicker with information than how I mostly work and make sounds, but I think for now, that this is merely part of my process of trying to be actively listening-with/within this space, with this yard, part of the new sonic community I have arrived in, some kind of dwelling space in between resonance and interruption, or perhaps, an embrace of the idea of interruption as, in itself, a kind of resonance.